The Freeperson Award for best cartoon, illustration or infographic

The Morden Lazarus Prize for best editorial, column, or opinion piece that thoughtfully argues labour’s position on an issue

The Cliff Scotton Prize for a narrative, video, audio or visual that reflects history, traditions and culture of the labour movement

The Fighting Oppression Award. (For a communications initiative that raises consciousness and contributes to struggles against racism, sexism, homophobia, ableism and other forms of oppression and discrimination.)

Public Service Alliance of Canada, Sick Leave For All

Excellence in Layout and Design

CUPE Atlantic, Count me In Campaign

WINNER #2: PSAC. “Idle No More in the struggle for Aboriginal Justice” 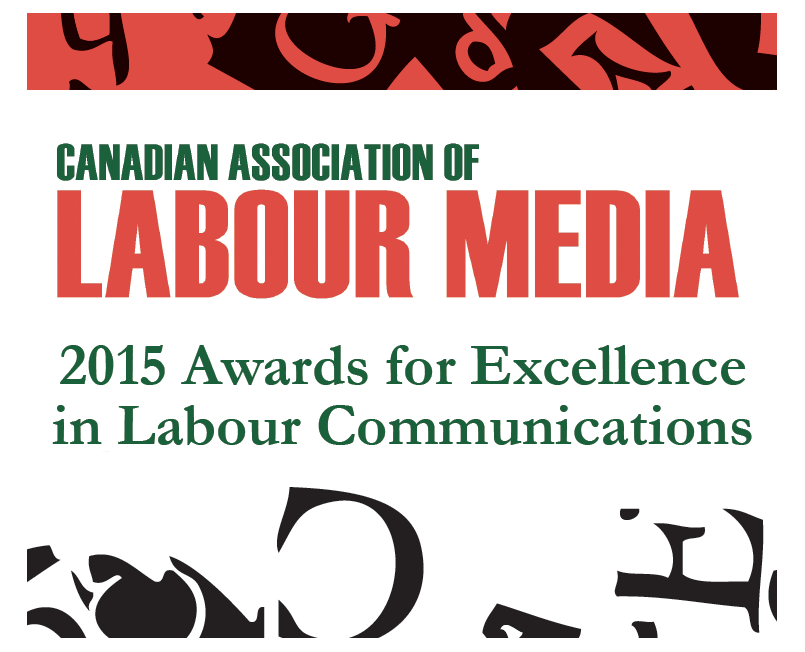 Jennifer Hollett is an award winning broadcast journalist (CBC, CTV, MuchMusic) and a leader in Canada’s rising generation of community organizers and activists redefining politics. A leading digital expert, Jenn uses social media to increase participation and mobilization in politics and social issues. She studied public policy at Harvard University, obtaining her MPA, and was the digital director on Olivia Chow's mayoral campaign. Jennifer is the NDP candidate in the new Toronto riding of University-Rosedale.

Sam Bradd's work is Drawing Change: visuals that support progressive movements. He's a graphic facilitator and illustrator, and is unionized with Unifor's Freelance Union. As a graphic facilitator, Sam listens and draws to facilitate organizations in doing their best work – dialogue, strategic planning or engagement. His unique background combines 15 years' of facilitation experience and a Master's in Education from UBC. His clients include unions, government, Indigenous organizations, health authorities, universities, non-profits and select private sector clients including Google, Shaw and Lululemon. In the community, Sam draws historical non-fiction comics about labour history with the Graphic History Collective (new book coming in 2016), and was a 2013 judge for the Canadian Association of Labour Media awards. He lives in unceded Coast Salish Territories. Contact him at sambradd.com or on twitter, @sambradd.

Amanda Buckiewicz is an emerging producer/director, and the creative head of Amanda Bux Productions. She cut her teeth as a segment producer at Discovery Channel’s Daily Planet, having produced more than a hundred features and more than 400 interviews for the show, ranging from extreme athletes in Canmore, AB to the world’s hottest wind tunnel in Belgium. She developed and produced the column Riskin’s Business starring host Dan Riskin, as he answered simple questions with scientific experiments, like testing just how quiet predatory birds are when they’re on the hunt, and seeing if there is actually strategy to Rock Paper Scissors. She just wrapped her first full series Great Lakes Wild, an 8-part nature documentary show looking at the animals living around the Great Lakes. She wore multiple hats as producer, writer, as well as an additional shooter with her trusty GoPro and Panasonic GH4. Now, she’s story editing for The Big Feed, a nature series looking at how animals are fed at the National Zoo in Washington, DC.

CALM has named some awards after communicators who have made significant contributions to the labour movement.

Ed Finn has ink in his blood. For more than 32 years Ed has written articles and produced publications that championed labour’s views. Although Ed had initially worked in the mainstream media, he joined the Canadian Labour Congress in 1959. Four years later, Ed dedicated himself to editing the CBRT newspaper, Canadian Transport, for the next 18 years. At the same time, he wrote the only regular national column devoted to unionism for The Toronto Star. In 1981, Ed joined CUPE as the editor of The Facts until his retirement in 1991. Throughout his life Ed worked tirelessly with the NDP. He was the first provincial leader of the Newfoundland NDP, and ran both provincially and federally as an NDP candidate. Ed currently edits the Canadian Centre for Policy Alternatives publication, The CCPA Monitor.

The Katie FitzRandolph Prize for the best overall publication, locals up to 500

Following a career in daily newspapers across Canada, Katie FitzRandolph became a communications officer with Ontario Public Service and Employees’ Union. During her 25 years with OPSEU and 24 years on the CALM executive, Katie devoted much of her time to teaching new editors how to put out good newsletters. Today she lives in Fredericton, where she is learning how to make web pages and working to turn an 1884 elementary school into a vibrant arts and learning centre. Although semi-retired Katie continues to teach at CALM conferences.

The Morden Lazarus Prize for the best editorial, column or opinion piece that thoughtfully argues labour’s position on an issue

Morden Lazarus was a union news innovator. In the 1930s Morden helped to found the first Co-operative Commonwealth Federation newspaper, the New Commonwealth. Shortly thereafter, in January 1944, Morden established the first Canada-wide news service for CCF and labour newspapers, called the Co-operative Press Association. By 1956, when theCLC was founded, 40 union newspapers subscribed to CPA. In 1972 the service was renamed the Co-operative Press Associates. CPA was the first and only labour news service in North America for many years. Both a writer and historian, Morden wrote three books about the labour movement. He continued to be active in the NDP until his death and was unfaltering in his dedication to the labour movement and to the NDP. Morden retired as the OFL’s Public Relations and Education Director in 1971.

The Cliff Scotton Prize for the best piece reflecting the history, traditions and culture of the labour movement

Cliff Scotton was the consummate political advisor and wordsmith. In 1951 when Cliff emigrated to Canada, he followed his Labour Party past and immediately joined the Co-operative Commonwealth Federation. Until his death in 1995, Cliff worked with several NDP premiers, provincial and federal leaders across the country, including Tommy Douglas and Ed Broadbent. A wordsmith by nature, Cliff penned scores of articles and edited a number of labour publications such as Co-operative Press Associates. An IAM member, he worked for the IAM, the CLC and the Paperworkers. Cliff worked relentlessly for the NDP. He campaigned in more than 150 elections, and believed wholeheartedly in the labour and social democratic movements. Cliff served for more than 30 years on the NDP Federal Council, and was the NDP Federal Secretary for 10 years.

The Dennis McGann Stroke-of-Genius Award for the most innovative, uncategorizable communications project

Dennis McGann was a gifted communicator. A writer, designer, editor and a crafter of messages, Dennis dedicated his life to the labour movement and to the NDP. He was editor of the BC NDP’s newsletter. In 1979 Dennis joined the CUPE National Office in Ottawa as a communications officer. A few years later, he moved to B.C. to continue his CUPE work. Dennis’ creative energy was tireless. He worked on several NDP federal and provincial election campaigns, often designing and crafting the messages and ads to be used. Dennis edited numerous publications and generously gave his time to developing the talents of budding writers and editors. An active member of CALM since its inception, Dennis was a CALM vice-president for 13 years. He left CUPE in 1992 to help found NOW Communications, and was its creative director until his death in 2001.